These maps were produced by the Land Use Commission (LUC) for informational purposes only.  These map and all the information contained within shall not be used for boundary interpretation.  The authoritative boundary lines between State Land Use District Boundaries are on the official U.S.G.S. quadrangle maps currently filed at the office of LUC and may be further defined by officially-recognized LUC Boundary Interpretations supported by metes and bounds descriptions.

The quadrangle name and State Land Use Number can be located in the upper left corner of each grid square in the diagram below of the island of Kaua`i.  The following list provides the quadrangle names and State Land Use Number including the direct links to a digital quadrangle map.  The other large numbers and red dashed lines seen on the map diagram below delineate the Tax Map Key “Zone Number” as utilized by the county. 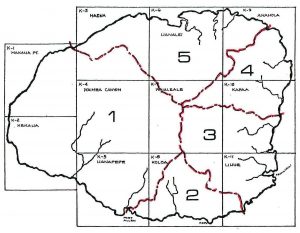